The catch? They’re all from Classic Age Hollywood. Here goes:

I began spreading [the Trumps] on the blotter before me. The one bore a wily-looking little man, with a sharp nose and a laughing mouth and a shock of straw-colored hair. He was dressed in something like a Renaissance costume of orange, red and brown. He wore long hose and a tight-fitting embroidered doublet. And I knew him. His name was Random.

– Alan Ladd, with Veronica Lake as Vialle. He has the height, the toughness, and the noir look that fits in well with Random’s first appearance, 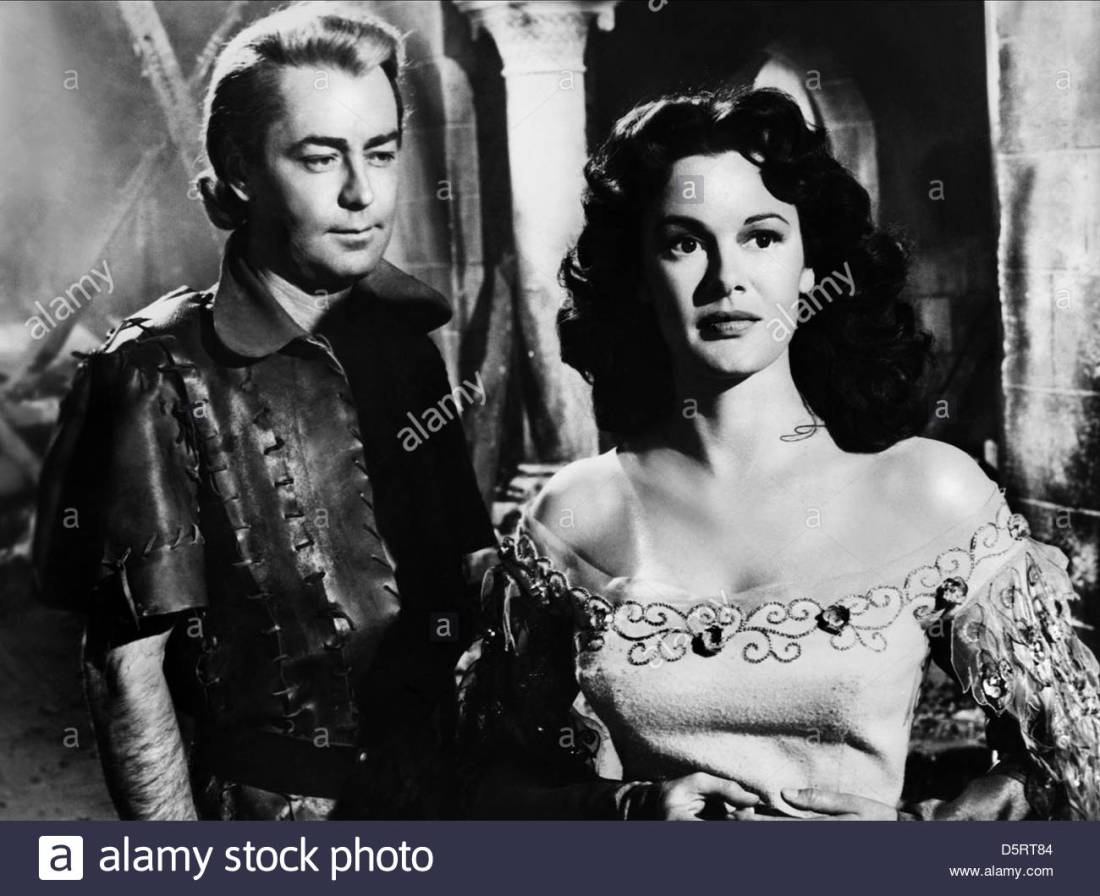 He doesn’t look quite at home in a tabbard, though, and wasn’t much of a one for action. Second choice: Audie Murphy. Hey, if he can cowboy, he can knight!

Next, there was the passive countenance of Julian, dark hair hanging long, blue eyes containing neither passion nor compassion. He was dressed completely in scaled white armor, not silver or metallic-colored, but looking as if it had been enameled. I knew, though, that it was terribly tough and shock-resistant, despite its decorative and festive appearance. He was the man I had beaten at his favorite game, for which he had thrown a glass of wine at me. I knew him and I hated him.

– Charlton Heston—a tall, physical presence who can come across (in the first books) as a genuine threat, and later, as a kickass ally; who would be quite good (heck, it’s all that he ever did) at the awkward, macho-man trying to be suave-type of flirting Julian engages in. Despite his Iconic Hero status, Heston was extremely good when he played scummy or creepy characters. He was also quite at home with swords and armor. 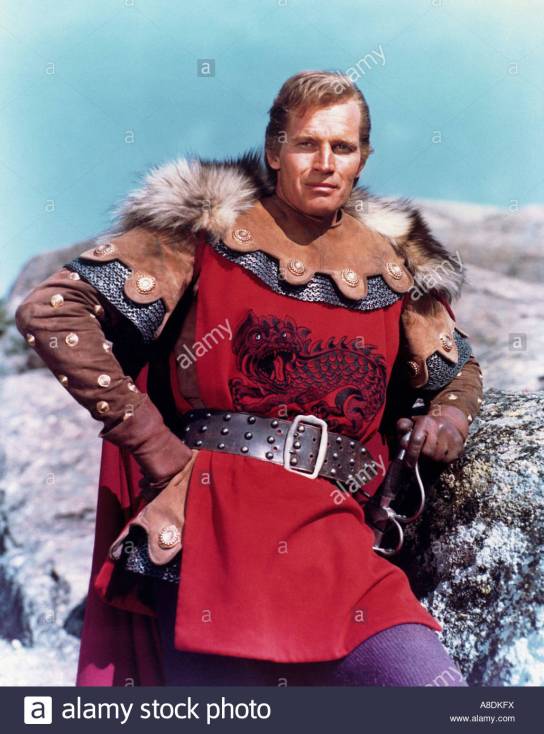 Then came the swarthy, dark-eyed countenance of Caine, dressed all in satin that was black and green, wearing a dark three-cornered hat set at a rakish angle, a green plume of feathers trailing down the back. He was standing in profile, one arm akimbo, and the toes of his boots curled upwards, and he wore an emerald-studded dagger at his belt. There was ambivalence in my heart.

– Anthony Quinn, despite the lack of adequately swashbuckling promo pics, was pretty good at being nautical (Caine is one of the Amberite admirals.) 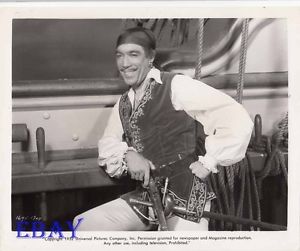 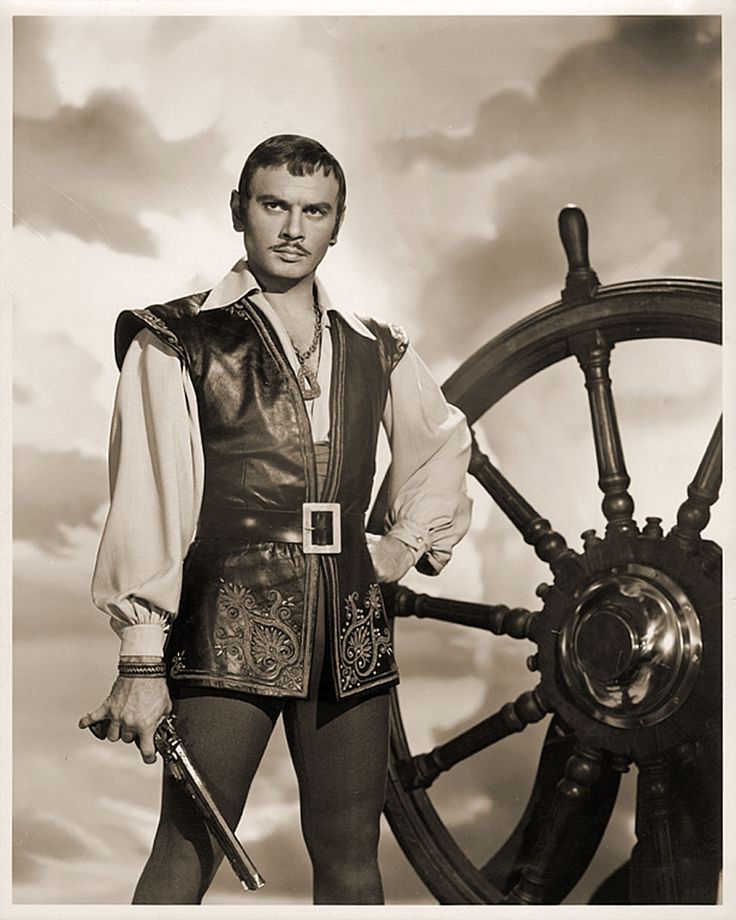 Then there was Eric. Handsome by anyone’s standards, his hair was so dark as to be almost blue. His beard curled around the mouth that always smiled, and he was dressed simply in a leather jacket and leggings, a plain cloak, high black boots, and he wore a red sword belt bearing a long silvery saber and clasped with a ruby, and his high cloak collar round his head was lined with red and the trimmings of his sleeves matched it. His hands, thumbs hooked behind his belt, were terribly strong and prominent. A pair of black gloves jutted from the belt near his right hip. He it was, I was certain, that had tried to kill me on that day I had almost died. I studied him and I feared him somewhat.

– This one is hard; Eric is an important character, but has hardly any screen time at all in the books; and further, each of his appearances is seen through the eyes of Corwin—who despises him.
George Sanders apparently had a thing for being “hero’s evil brother” during the fifties–OMG, I forgot Ivanhoe! He did too do swashbuckling! Swoon…Ciaran Hinds, on the other hand, is a bit too old and broody; Eric is all bravado, all the way–even while dying. Sanders it is, with a side option on Basil Rathbone.

Then there was Benedict, tall and dour, thin, thin of body, thin of face, wide of mind. He wore orange and yellow and brown and reminded me of haysticks and pumpkins and scarecrows and the Legend of Sleepy Hollow. He had a long strong jaw and hazel eyes and brown hair that never curled. He stood beside a tan horse and leaned upon a lance about which was twined a rope of flowers. He seldom laughed. I liked him.

– Gary Cooper. None other and no one else.

I paused when I uncovered the next card, and my heart leaped forward and banged against my sternum and asked to be let out.
It was me.
I knew the me I shaved and this was the guy behind the mirror. Green eyes, black hair, dressed in black and silver, yes. I had on a cloak and it was slightly furled as by a wind. I had on b]ack boots, like Eric’s, and I too wore a blade, only mine was heavier, though not quite as long as his. I had my gloves on and they were silver and scaled. The clasp at my neck was cast in the form of a silver rose.
Me. Corwin.

– This one is also extremely hard. Tyrone Power is the natural choice—green eyes and black hair, physically capable. The problem was that for a long time I disliked Tyrone Power and didn’t think him capable of the part. I’ve more or less changed my mind after seeing him in Rawhide and, er, well, Love Is News. And, yes, he could swash buckles as well as the next man or slightly better. Robert Taylor is an option, but is far too wooden. 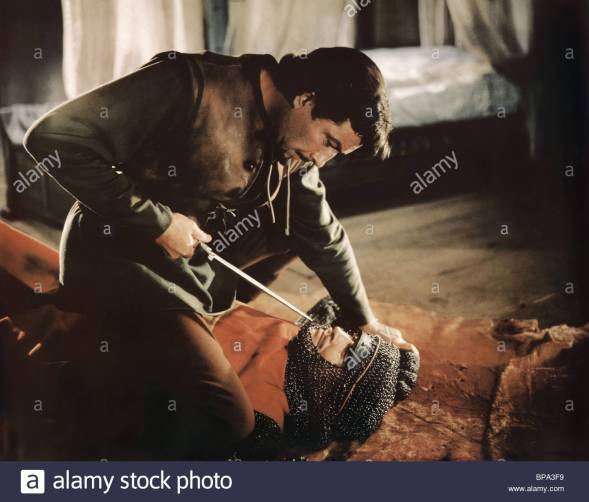 ….Although that is a very Corwin-like method of winning a fight.

And a big, powerful man regarded me from the next card. He resembled me quite strongly, save that his jaw was heavier. And I knew he was bigger than I, though slower. His strength was a thing out of legend. He wore a dressing gown of blue and gray clasped about the middle with a wide, black belt, and he stood laughing. About his neck, on a heavy cord, there hung a silver bunting horn. He wore a fringe heard and a light mustache. In his right hand he held a goblet of wine. I felt a sudden affection for him. His name then occurred to me. He was Gerard. 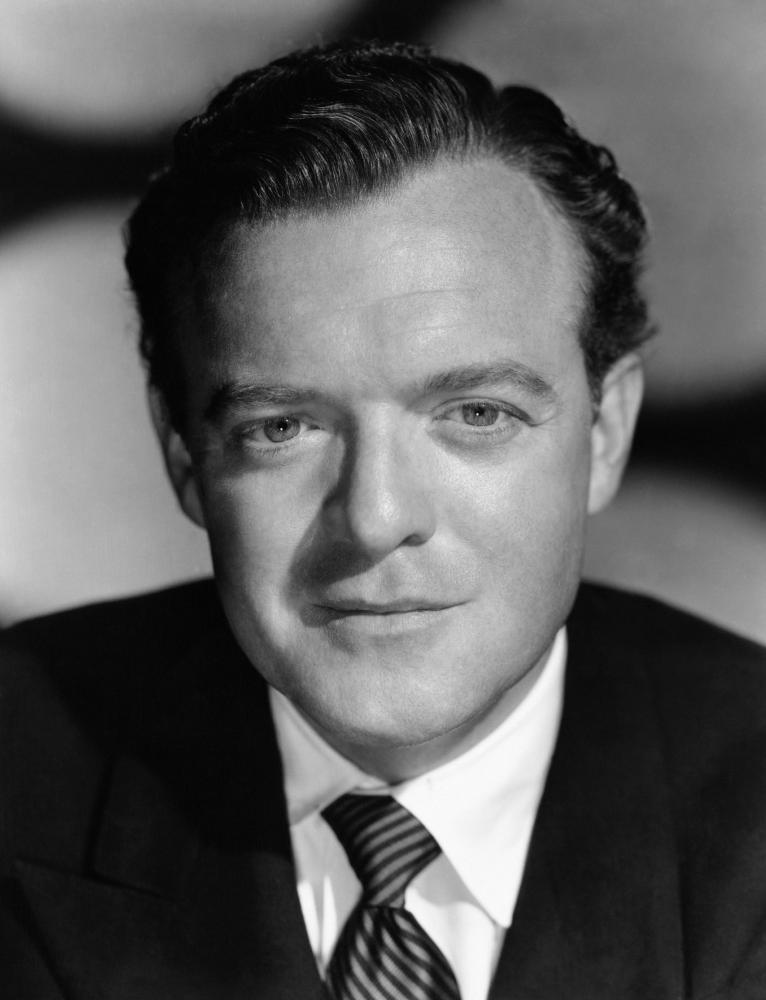 But I guess you can’t go for the resemblence to Corwin, then.

Then came a fiery bearded, flame-crowned man, dressed all in red and orange, mainly of silk stuff, and he held a sword in his right hand and a glass of wine in his left, and the devil himself danced behind his eyes, as blue as Flora’s, or Eric’s. His chin was slight, but the beard covered it. His sword was inlaid with an elaborate filigree of a golden color. He wore two huge rings on his right hand and one on his left: an emerald, a ruby, and a sapphire, respectively. This, I knew, was Bleys. 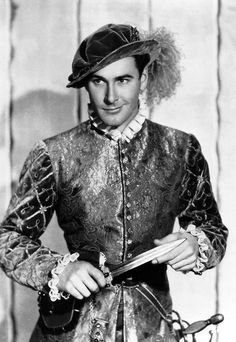 I didn’t think there were, but here’s another picture anyhow. This one represents Bleys on his way up Kolvir. Note smear of blood on cheekbone.
Note cheekbones.
Where was I?

Then there was a figure both like Bley’s and myself. My features, though smaller, my eyes, Bleys’ hair, beardless. He wore a riding suit of green and sat atop a white horse, heading toward the dexter side of the card. There was a quality of both strength and weakness, questing and abandonment about him. I both approved and disapproved, liked and was repelled by, this one. His name was Brand, I knew. As soon as I laid eyes upon him, I knew. 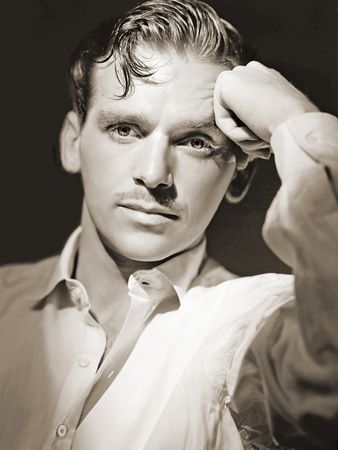 – Douglas Fairbanks Jr. He brood, he also gloat. He swashbuckles, he cavils, he smokes, he threatens fair maidens (not pictured.)  I think he’ll do it pretty well.