Someone just drove from California to New York in 25 hours. All right, 25:55, but that’s 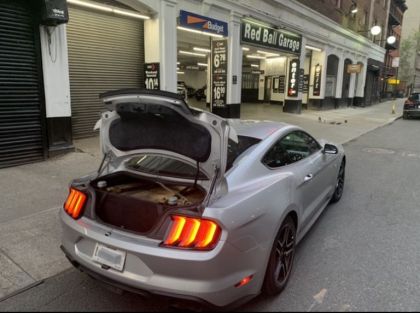 still an average of 108 mph….with only one stop for gas and no cops. And he even claims to have used his CB to talk some truckers into moving for him. That’s awesome.

But while most of us were twiddling our thumbs at home during the COVID-19 closures (or mourning the loss of our jobs, or dying), a handful of scofflaw endurance drivers were busy making tracks from New York to L.A. Several of these were solo runs, and those of us in the know watched, amazed, as the time it took one person to drive 2800 miles nonstop plummeted from the low-to-mid-30s to just under 28 hours. Even those times, set only a few months ago, were blown out of the water recently when Fred Ashmore, 44, of Hancock, Maine, rented a Mustang GT, removed its passenger seats and other interior accessories, strapped in enough extra fuel tanks to bump the car’s capacity to around 130 gallons, and made the trip from the Red Ball garage in Manhattan to the Portofino Hotel & Marina in Redondo Beach with only one stop for fuel.

Oh yeah, and he did it in a rental car and barely spent any money on it.

Ashmore’s effort shines as an example of extreme frugality. He says he didn’t spend more than $3000 on his whole trip, including the car, its strapped-in, Facebook Marketplace-sourced fuel tanks (and fuel), and the electronic countermeasures that have become de rigueur for anyone wanting to drive at these speeds without landing in jail.

Mind you, some people aren’t that appreciative.

“There are so many of these runs now, it’s hard to think of anything to say,” he said. “What is this, like the 47th one this year? I don’t want to take anything away from Fred, but I just want six months with no records.”