The Last Wagon is a 1956 Western movie starring Richard Widmark and Felicia Farr. That should be enough information for you to decide whether or not to read further, but then again, here’s another tidbit. It’s a really good, 5-star, 2-thumbs-up 1950s Western. Which means that, now, in the 2020s, it’s a triumphant 11/10 with sparklers.

Widmark is Comanche Todd, a white man who has lived with the Indians, (spoiler: married among them), and who is currently wanted for murder–of other white men. He’s been hunted down, beaten down, and is in the process of being dragged (literally, behind a horse) back to civilization for a hangin’ by the splendidly nasty sheriff (played by That Guy who is the Thuggish Saloonkeep or Half-A-Cigar-Smoking-Storekeeper Guy in most of these kind of films) when they run into a wagon train. The settlers have decided to cross Apache territory without a cavalry escort, a grave mistake which they soon pay for. The only survivors are six teenagers who had snuck off the night before to go skinny-dipping and/or bring the would-be dippers back–and, despite being chained to a wagon wheel, Comanche Todd.

Fortunately, out of the six, three have already befriended Todd, and the others see reason and quickly follow his lead. Their only way out leads due west, across the Apaches’ land–and the Apache are gathering to take revenge on the white men for the deaths of their kin.

This is a regular, adult Western, certainly, but you could just as easily put it in the “young kids learn responsibility and grow up” genre as well: this happens, to a more or less dramatic degree, for all of the teens. There’s Ridge, the blustering, fearful one; Valinda, the haughty, racist one; and Jolie, the beaten-down half-breed. The former two learn hard lessons about humility and humanity; the latter, in contrast, learns to forgive–and hold her head up proudly. (The other three were nicer from the beginning and mostly learn: do your job).

Widmark’s Todd, rather like Fred MacMurray (see re: Face of a Fugitive), is just so gosh-darned decent and good at what he does, he’s a joy to watch. I’m sick of antiheroes, wary of ambiguous ones, and reserve strong language for incompetent ones. Widmark is a great enough actor that even what on paper is a pretty idealized character seems natural. He’s a man who takes charge of a bunch of unruly teenagers and makes men–and women–out of them–and does it while looking cool. 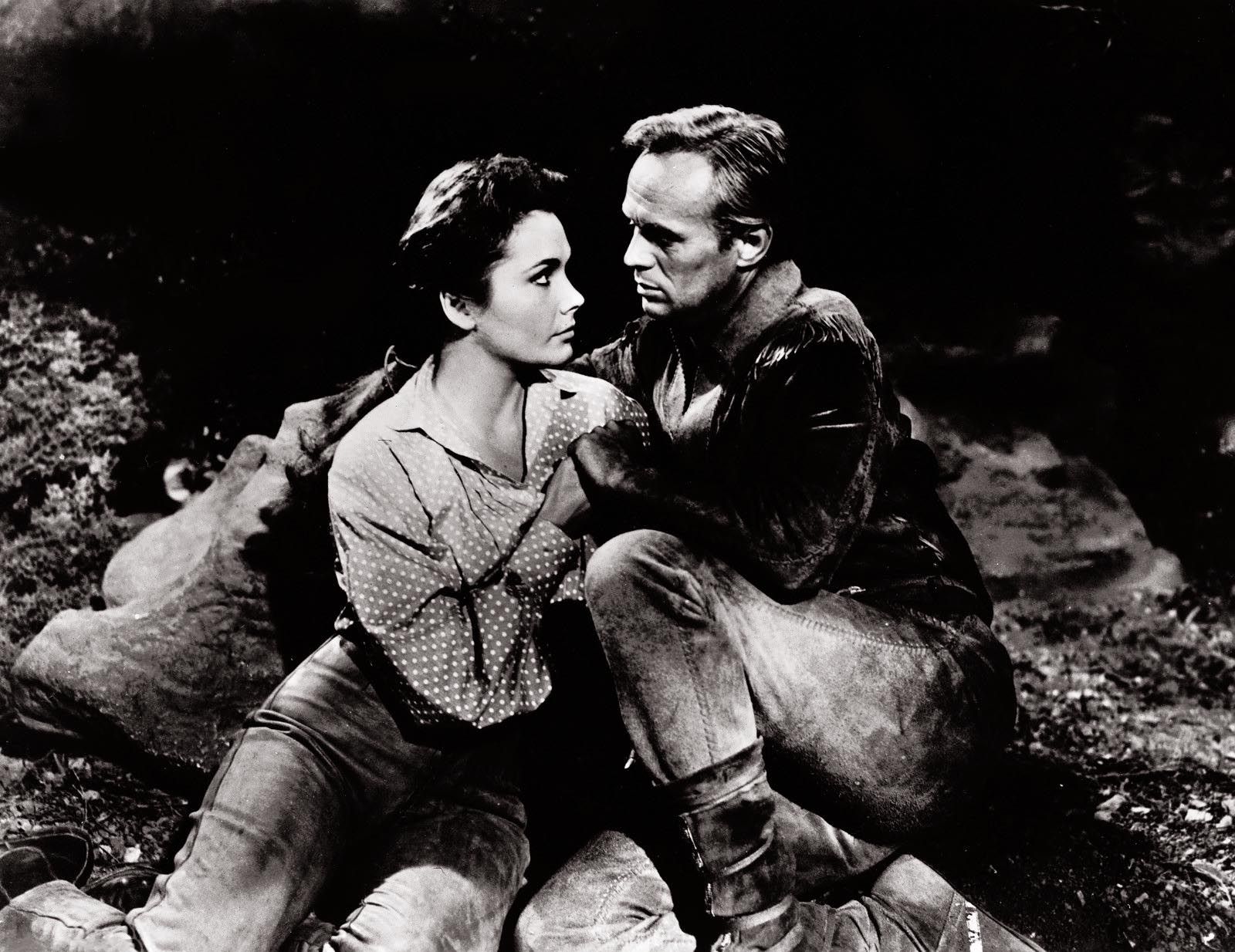 The other actor who impressed me in this was Felicia Farr. I’ve only seen her in two other movies (3:10 to Yuma, and Hell Bent For Leather), but she was great in all of them–and this one. She has the perfect quiet, self-contained, confident gentleness that you could buy would convince an outlaw on the run into spending the night with her instead, or a desperate man into trusting her to take his story to the posse.–tied up together with all the poised strength it would take to actually keep her wits about her and survive those same dangerous men. And all with perfect ’50s glam, too.

On the downside: this film throws some not-exactly-subtle jabs at Christianity. Young Todd’s prayers did not save his father; the settlers’ prayers of thanks for safe journey are decidedly premature; the Bible-loving general’s platitudes are dismissed with scorn by Todd and audience alike. The overall moral, however, appears to be the still-wholesome “Do your duty–and treat people well.” And General Bible-Thumper does the right thing in the end when Felicia quotes Scripture back at him, so, that’s OK then. Ah well.

On the upside, there are a couple of scenes I really loved: Todd nailing the sheriff with a hatchet (“Seemed reasonable to me…”) comes at the end of a sequence of jack-booted thuggishness that makes it just so satisfying.Todd challenging two Apache warriors to combat: (“Come! If you do not fear one Comanche!”)–awesome. A slightly-clueless Cavalry Lieutenant having decided Todd is not the Indian fugitive he’s looking for…as Todd tucks away his amulet, mounts up on an Indian pony, and picks up his bow and arrows…? Heh. (The Lieutenant doesn’t figure it out until later). In fact, Richard Widmark in general just owns this picture.