Welp. This one looks even worse than Artemis Fowl. In fact, it looks like it took a look at Artemis Fowl‘s utter disrespect for the source material, the fans, and continuing profitability of the franchise, said “Hold my beer,” and then strapped on JATO wings while smiling weirdly and repeating a gibberish language in which the words “strong” and “non-binary” can be faintly distinguished but which lapses back into English when concerned bystanders attempt to intervene. Then they screamed the phrase “sexist racist homophone manbabies” and while this still didn’t completely clear the blast zone, began to chant the words “Of Color!” and “Toxic!” while fumbling with the detonation button. 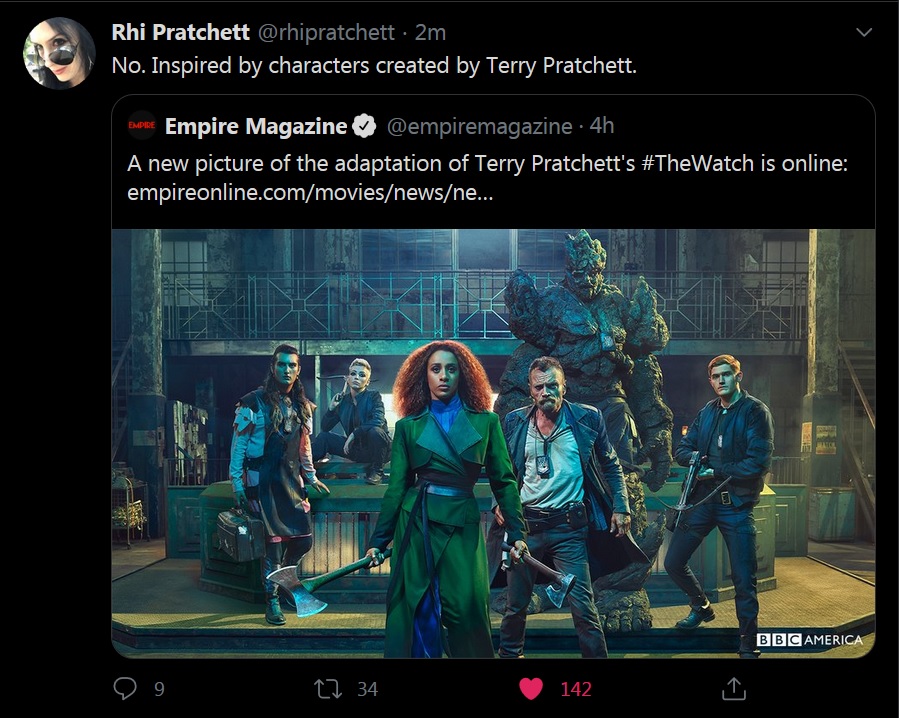 The strong be-cervixed individual of color in the foreground? That’s Lady Sybil. Oh, and the individual to the far left is Cheery.

(fourth draft) Every time I try to write a takedown of this situation, I end up frothing at the mouth. (True fact: when the very first images from the series hit, I ended up ranting so ferociously to the other interns that they referenced it for months afterwards.)

Why do they do this? Why?

Ms. Pratchett may put the very best spin on it she can, but it’s not a matter of inspiration.

It’s because they hate. They have chosen to destroy the Discworld’s Night Watch series because of hate. They hate you, and they want to destroy anything that you loved, that made you happy, or that was simply wholesome, beautiful, creative, and worthwhile.

The ultimate problem is theirs, though. A real fan knows what it is that men must do against such reckless hate.

“The two bright ones are its eyes. Notice that they do not flicker, because a cat does not blink. We use a nictating membrane to moisten our eyes while maintaining a steady gaze. Now, trace a curving line outwards to your right. That is its flank and paw. The scatter of small bright stars further right is, of course, its tail.”

Joshua stared obediently into the deep sky. It had been the work of almost a full month for The Cat—it still hadn’t told him its name—to convince him of its intelligence and his sanity, and then two more weeks for a sufficiently dark and cloudless night. (It wasn’t his fault. If it had been trying to help him memorize with the Anatomy & Physiology lab manual, instead of starting with calculus, things would have gone a lot faster.)

“I…I think so.” Joshua craned forward. He almost could, too—unlike all the other awkward line drawings of constellations, this one seemed a lot more…real. It was all in his head, of course, pareidolia because of the suggestion put there, sure, but it almost really did look like…

“How did you know it was there? I’ve never heard of a constellation like that, and I even checked the star map app thingy.”

“I will tell you how I know it,” the cat said. Its eyes threw back the lanternlight as it paced closer. “It is because they are my stars.”

(Click through for the actual submissions, book promos, and promptorial image, at According To Hoyt)