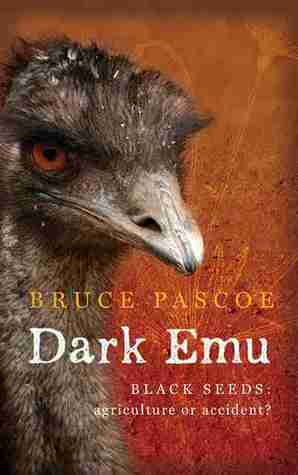 “So there’s this book called Dark Emu about how the Australian aborigines actually had pretty intensive cultivation before the British or whoever came….”
“What? Well, that’s a lie.”
“No, no, see, he has first-hand, primary sources and so on. He says they practiced intensive cultivation of things like grass and yams…”
“Grass?”
“For the seed grain.”
“Nuh-uh.”
“He thinks its akin to the primitive levels of cultivation of wheat. You know, historically.”
“Grass seeds are not as nutritious as wheat.”
“Well, like, the grass species they used were in the process of being domesticated, the same way it was in Mesopotamia. Only the process was interrupted. Or something like that, I think he thinks.”
“That would be smart except that that didn’t happen in Mesopotamia, either.”
“Well, yes, but the primary sources do say they did have huge fields of grass–”
“Yeah, and huge, huge fields of yams, as far as the eye could see. What they did is they used fire, like all the native peoples. They didn’t cultivate because they didn’t have domesticated animals to pull plows. I’m sure they were able to have large areas to harvest, in places like the coasts where you can do that kind of thing. This guy is just a bleeding-heart liberal environmentalist who doesn’t know anything about agriculture. Have you thought about changing your major to English?”
“Well, that’s another part of his thesis. He thinks that since they didn’t plow and there were no hoofed animals, this had a beneficial impact on the soil, since there weren’t any sheep to overgraze and the soil stayed covered almost year-round. So there are places now are desert that used to be able to support a, not necessarily a large, population.”
“Nope. Nope. Did not happen. You see, Anthropology and Sociology majors have to to do something to pay off their college loans, so they have to go and come up with things like this. It makes him feel good to think about the pure, innocent, primitive natives being out there, secretly being very smart but not as smart as he is. English majors just get jobs teaching school and reading books.”
“Well, he has primary sources! And sheep are very destructive! They could have contributed.”
“Yes, and he thinks that’s a strong argument because he’s an academic. He’s never heard of rotational grazing. No farmer wants to destroy his own pasture, why would he?”
“Well, I’m against sheep on general principles anyway. And Australia has had real trouble with introduced species. Like cane toads. And rabbits.”
“Uh-huh, and are they complaining about rabbits in the original sources?”
“No! Look, what he’s saying boils down to is that the aborigines had a pretty good established system of management for the land that was very different from the European system, that one didn’t necessarily work as well. And that they had some pretty sophisticated other technologies as well, like fish traps and animal traps.”
“And if you teach high school English to the kids, you can assign them books about living off the land and learning how to make bear traps from tree bark. What was that book you used to like? It was about the two boys out in the woods.”
“See, I thought his book was interesting because it seemed like a very elvish way of cultivating the land. You live in harmony with nature, and you get a giant harvest–”
“–of grass–”
“But you use minimal effort and you manipulate the landscape so the whole system works for you.”
“Wrong. Elves live in cities made of stone and glass and they plunder the earth to mine gold and jewels. I read it in a book.”
“….those are city elves, dad.”
“City elves are better than country elves. Who wants to be a country bumpkin elf when you could be a sophisticated and glamorous–”
“WHATEVER, DAD.”

[Note….This was a more-or-less verbatim conversation. I keep reposting it because it makes me laugh every time.]