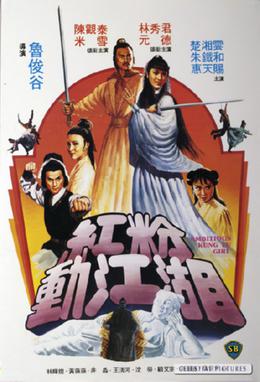 It’s a romantic comedy. No, really.

So I’m doing an(other) alphabetical crawl through my videos folder. Because no internet, no TV, and long days of training equal too tired to do anything else except sit on the couch and mindlessly watch old movies.

Anyhow, in five words or less, this movie is: Cheesy, chop-sockey, cheap, and charming.

And because any description of the plot is inevitably going to be of less interest than just the frank description of what’s actually in this insane but lovable movie, what you can expect when you watch this movie is:

– a squeaky and immature female lead who is a) bored, b) not nearly as good at kung fu as she thinks she is, c) head over heels in love with the local storied hero, d) in over her head on wet pavement.

– an only slightly less immature male lead who is mostly redeemed as a character by his penchant for doing random gymnastics (no, really) during non-fight scenes. He does a backflip in the far background of someone else’s fight scene at one point.

– a vile villain who sells girls into prostitution and has a silver eyepatch he uses in fights to blind people and wants to marry the heroine because her father is filthy rich
– a smug villainess who manages the prostitution ring for him because he’s her husband or something except he sold her into prostitution? She instantly cozies up to Hero #3 when the villain is dead, only he’s not quite dead and he pops back up to stab her because she betrayed him and also because she stepped on him while he was down. Can’t really blame either of them.

– a cross-dressing prostitute who….also can play ping-pong with his fake breasts? The heroine actually runs away screaming at that point.
– an evil swordswoman
– a fake storied hero who is actually a penniless drunkard who is actually kind of a nice guy who is actually a traitor who is aaaaaactually an undercover hero (but still penniless?)
– a magistrate with the wonkiest of hats who is actually working for the bad guys as the 13th hour plot twist

– random ninjas
– kung fu
– A freeze-frame ending featuring Hero #3 attempting to facesmush Heroine and Hero #2 who have just admitted their liking for each other at swordspoint, by main force.

I mean, what else can you ask of a Shaw Bros. movie called Ambitious Kung Fu Girl that’s a romantic comedy?