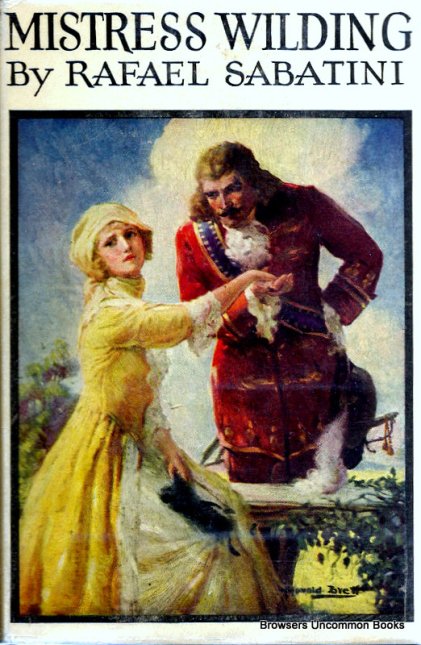 There’s just something about swashing buckles that hits the spot. This is why Captain Blood, Sea Hawk, Scaramouche, The Three Musketeers, and their lesser children–like Pirates of the Carribbean–exist. Rafael Sabatini might not have been the first, but he is the best of the best. And with the best you get cunning heroes, ravishing heroines, billowing sails, cannonade, heaving bosoms, cutlasses, sabers, rapiers, flintlocks, the high seas, highwaymen, and those really nice lace cravats.

Unfortunately, Mistress Wilding isn’t one of the best. It isn’t even in the top ten.

Its cast is simple:
– Ruth Westmacott-slash-Wilding, who is wonderful, gentle, rich, beautiful, and rich, and also beautiful, while furthermore beautiful and slightly spineless.
– Richard Westmacott: who is worthless.
– Rowland Blake: who is also worthless, and after Ruth’s money.
– Ruth’s Cousin Diana: who is jealous of Rowland Blake, and the second most proactive character in the novel.
– Anthony Wilding: who is the hero.
– Nick Trenchard: who is the hero’s psycho sidekick, the most proactive character in the novel, and the guy who actually disposes of the villain while the hero is making out with his wife.
– Some other people.

Its plot is likewise simple:
– Richard’s life is in danger (due to him having insulted Wilding)! Ruth must appeal to Wilding to save him. Wilding saves Richard, at the price of Ruth and Wilding getting married.
– Part 2: Richard’s life is in danger (due to him trying to backstab Wilding)! Ruth must appeal to Wilding to save him. Wilding saves Richard, and then has to run for it.
– Part 3: Wilding joins the Duke of Monmouth, but the rebellion is doomed to failure. This part is quite boring. No heaving bosoms at all.
– Part 4: Wilding’s life is in danger (due to Richard being part of a plot against the Duke)! Ruth must save him! Woo, a plot twist! Then Wilding saves the Duke.
– Part 5: Ruth’s life is in danger; Wilding gallops madly after to save Ruth! Surely there will be bloodshed this time, our gallant hero will seize the villain who rode off with the lady over his saddlebow…wait, no fight? More talk?
– Richard betrays Wilding. Oh no, who could have seen that one coming?
Wilding is sentenced to be shot! But he’s given one minute to reconcile with Ruth! She luvs him! Woo, finally! And then he’s marched out to be shot, but, y’know.
…marched out to be stood up in front of a ditch. In the dark night. While wearing black. Um….
– Part 6: The Duke of Monmouth loses the war while Wilding is getting a shower and a nap. (Captain Blood is meanwhile gearing up for his adventures, I take it.)
Nick arrives to fetch Wilding so they can commence getting the hell out of Dodge. Wilding has a better idea! Involving…his boots?
– Part 7 : What the hell is Rowland still doing at the Westmacott house? He straight-up assault-kidnapped Ruth!? A dramatic entrance! Horay!
“Sir, had I a man at hand to make you regret that insult!”
“Madam, that man is here.”
So Wilding’s cunning plan was to take the secret letter in his boot to the King’s agent and thus become the King’s very own best friend. And to think that until now he’s been the only character to not betray or turn aside from his actual loyalty to the Duke. He and Ruth are reconciled and prepare to go home, but the matter of Rowland and his (repeated) insult to Ruth…
…is conducted off-screen, by his sidekick.
Not only is there no battle, no duels, and no fights, there isn’t even a climactic fight to end the book?

All in all, this is one of Sabatini’s much lesser efforts. There is no (nil) on-screen action, tedious interludes, and the weakest (Ruth) or least likeable (Richard, Monmouth) characters are much in the fore. This isn’t to say that they’re all bad: I liked Diana, who at least knows what she wants and how to get it, and I liked Nick, who just keeps being thwarted in his efforts to do the smart thing and eliminate his buddy’s troubles at the source. But Wilding himself, while in some ways an exemplar of swashbuckler/pulp heroes in the charisma and charm department, lacks the brawn to back up his reputed brains; he’s too undisciplined in any area that involves Ruth, and frankly tends to slither in and out of situations without any real effort.

Ruth herself isn’t perhaps so much spineless as unable to act without outside prodding, usually from Diana, and just seems to have no real influence on anyone (other than Wilding) when she does. And, to cut her just a little more slack, this might not be a problem if she, say, tried and once, but when she’s dragged/pushed/rushes into a court of law for the third freaking time for pretty muchly the exact same reason as the first, it’s clearly a problem of the author and not the character.

Rated: Two heaving bosoms out of five. A decent romance, but a poor swashbuckler.