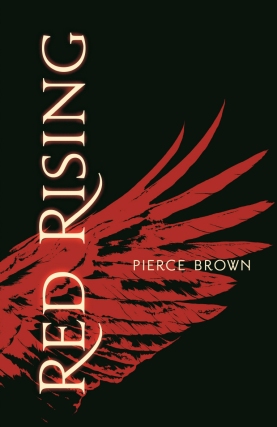 So I distinctly remember when I first read this book–it was in 2016, just before I went back to school. Lucky thing for me, too, because I was up all fricking night reading it, and who needs a brain for office work? For an exile from the stars, this was a blast from the past. It has–and revels in–an old-fashioned sense of grandeur and scale; it consciously leans into the pageantry of planetary romance, of decadent empires, mighty warlords, grovelling slaves, passing through the fire, children becoming adults, and the excesses of cruelty, loyalty, and courage that are used to create the next generation of warriors, leaders, servitors–and tyrants.

Plot: Sixteen year old Darrow of Lykos thinks he has it made. He’s a Helldiver–the most prestigious and dangerous jobs in the mining business–he’s married to the lovely yet rebellious red-haired Eo, and he’s just managed to raise their unit’s production of Helium-3 to the point where they are all but sure to get the Laurel, a generous bonus of supplies shipped in at great expense to their tiny, underground Martian colony all the way from Earth.

Except that in short order, Darrow’s world is destroyed. The Laurel is given to a different unit (unjustly); he and his wife are flogged for leaving their unit area–and then, at the command of the Governor of Mars, Augustus au Nero himself, Eo is executed for, well, being rebellious. Darrow soon follows her, but is saved by a mysterious terrorist group called the Sons of Ares. And a new world opens up to him instead. Mars is not a new-fledged, struggling colony–it’s a prosperous world which found it more profitable to keep its economic producers (the miners) in complete ignorance of the fact. More, Mars is only a part of the solar Empire; Man has terraformed and colonized almost every part of the solar system. That is, some men have.

Darrow is a Red: one of the mining caste. His overseers are Grays. The feared and dreaded soldiers are Obsidians. Pinks are bred for pleasure and Blues for engineers. The world is strictly divided between Colors, but on the top are the Golds. These are men and women born, engineered, educated, shaped, and molded to be the rulers of a society that stretches from Venus to Pluto and beyond.

The Sons of Ares want Darrow to become a Gold. Specifically, they want him to join the Institute, the highest of the highest…institutions…that produces the actual leaders of their Society. This is the place where the future admirals, governors, administrators, and generals go….and where they send their children. Including the children of Augustus au Nero.

(And yes, indeed, it is a strange plan that requires extensive surgery and biomodification carefully noted by the author; and on re-read, the fact that Darrow can go from a hardscrabble pseudocolonist to hitting the 99th percentile in the intake exams does strain credulity a little. On the other hand, part of this book’s charm is the fact that Darrow is an Awesome Hero in an old-fashioned way: the story follows him because he’s the best there is. Now, he’s not a Gary Stu because we see him suffer, make mistakes, work hard, trust the wrong people, and fall on his face–but overall, he’s the hero because he does incredible, impossible things and because he does incredible things he’s a hero. I like heroes. I think everybody does.)

Anyhow, exactly what the Insitute is and does is kept intensely secret, although you’d think that the casualty rates would offer a clue. Basically, several hundred picked cadets in several groups are dropped on a planet with a varying amount of resources and left to battle it out amongst themselves. House Artemis, for example, gets horses. House Ceres gets a castle with beehives, fields, defensible walls, and bread ovens. Darrow is a member of House Ares. They have weapons, but no home base; the ability to hunt for meat but not to bake bread or store it; and they have….personnel issues.

As I said, Ender’s Game–but with graphic violence and without adult supervision. Or–as it finally turns out–worse than that: the Proctors who are supposed to be supervising and maintaining their Houses have been taking bribes and playing politics. So no matter how brilliant Darrow is, becoming an accepted leader, gathering strong allies, uniting the Houses, taking over the gameboard, he will not be allowed to become First. That prize has been reserved for another. –For The Jackal: the son of Nero au Augustus….the man who killed Darrow’s wife.

The drama, it is evident, no? The book leans heavily into it, too, with Darrow brooding on and emphasizing to himself and the reader the epic scope of the battle he is fighting: the courage, the malice, the terrible power (institutional, societal, and personal) of the enemies he engages. This is cleverer than it sounds, because, as he struggles and ultimately triumphs, the stakes have been laid to raise underdog-hero Darrow to the same larger-than-life level as the men and women who unironically name themselves after the gods of old Olympus.

This book apparently didn’t make too much of a splash, coming out as it did at the tail end of the YA-novel bubble. (Although there is a sequel series I have thus far declined to read; it looks depressing.) I think there are a few other factors in play: namely, that this is a military scifi (not amenable to the interests of Twilight-loving YA consumers); that it has a heroic male protagonist who undergoes a rite of passage (thus not conducive to the agendas of YA publishers); that it’s competently written and has a distinct authorial style (complete anathema to the YA genre.)

I’m pretty out of touch with current scifi scene, but Mil-SF doesn’t seem to be a very popular publishing choice any more, let alone old-school space opera, let alone pseudo-planetary romances. Sweeping vistas, unexplored frontiers, and larger-than-life characters aren’t fashionable anymore. Male protagonists–even more so, a male who was actually if briefly married–are even stranger. But my greatest liking for this series comes from the last two points: that Darrow is heroic, and that these books are pretty darned well written. But in the interets of time I’ll limit my gushing.

Darrow is a hero because he has a good heart and a good goal and the former mostly prevents the latter from overwhelming him; because he uplifts (or at least tries to) others; and because he feels regret and guilt about the deaths he has caused. Equally importantly, he’s the protagonist–the guy who tells the story, and from whose point of view we follow events–and: he has an active role in shaping events in the story, and he’s cool and does cool things successfully.

The book is well-written. It is. It has a distinct narrative voice–short, rhythmic sentences, first-person narration, present tense–that takes a minute to get used to and then becomes invisible. Mostly though, it’s the worldbuilding that’s impressive, and here’s how.

The concept of the Institute is kind of stupid, but it’s what Pierce Brown wanted to read and so had to write….but he took the time and put in the effort to design a society that legitimately would believe dropping its future leaders on a planet to fight it out with their bare hands is a winning move, and then he portrayed that society faithfully and worked within the boundaries he’d set for himself. The idea of turning a Red miner from a low-gravity planet into a Gold, basically an entirely different human subspecies, is likewise kind of ludicrous; but Brown walks the reader through the process from bone regeneration to eye replacements without skimming over details (although I submit that the sleep-learning was a cheat). He’s thought long and hard about how his universe works, and the verisimilitude, even when not flaunted front and center, shows through the cracks.

Lastly, because I’m running out of time at this point: his characters are good. Darrow’s emphasis on the vividest traits of each person he meets works for the best, because it means that each person has some memorability. Better yet, almost everybody has a distinct and strong personality. Pax is boisterous. Sevro is gross and boisterous. Mustang is idealistic. The Jackal is calm and scary. Antonia is a bitch. Fitchner is getting too old for this sh*t.

But mostly I like Sevro. Wild-haired savage sidekicks are the best.