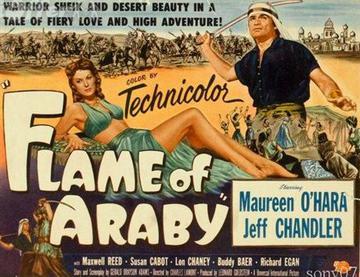 “So I knew I wasn’t going to have internet for a month or two so I downloaded a bunch of random movies, and now I’m going through them in alphabetical order. And now I’m at Flame of Araby.”

“I have never even heard of that.”

“It’s old. It’s so old there are actors playing…Arabs…and Bedouins, and they’re all white. And they’re in brownface.”

“It’s hilarious. And there are like guys in the background, y’know, bit parts, who you can recognize from other movies ’cause they in a bunch of Westerns and they filmed the movie in California where they film all the westerns, except they have the brownface on and fake moustaches, and they’re just like, ‘By the will of Allah!’ and, ‘Die infidel dog!’ and they still have their Brooklyn accents. It’s amazing.”

“Maureen O’Hara is in there, she’s the arabian princess, she’s actually really really good. She like, takes the part seriously and she commits to it. So her scenes are actually really good. She’s kind of wrangled into a stupid romance with the main hero, but I wish she actually hadn’t because she could have carried the whole movie on her own. Or she could have married the captain of the guard. He was a gunslinger in…some movie. [Tension at Table Rock.] But here he’s the captain of the guard. There’s a scene where she’s thinking of throwing herself off the balcony–

–and he’s like, ‘Your Highness, there is a chill in the air, you need to come inside.’ And they both, like, really commit to the scene. It’s just a little, simple scene, but it works. And it’s pretty good, especially ’cause with this movie your expectations are pretty low so when something does work, it’s even more impressive.”

“I see what you’re saying.”

“But, the plot is, there’s this guy and he’s chasing the famous wild black stallion–“

“Yeah, sort of. And he bumps into the princess and he’s really rude to her* and she’s kind of into it. But she goes home because her father’s dying. He puts her under the guardianship of her evil cousin and makes him promise not to let her marry one of the corsair lords. So guess what the cousin immediately goes out and does.” * [Which is putting it in a socially-acceptible way. The guy whales on her with a quirt and I’m expected to believe she’s that into it? Nuh-uh.]

“Well he promises her to them. So she slips around it by promising to marry whatever man wins the big horse race. And then she goes out to try and catch the black stallion, but the ‘hero’ isn’t going to let her to they have to come to an agreement, blah blah and then they race and he wins, whatever. I didn’t like the ending. I think she should have ridden the horse and won the race herself. I’m not a fan of the so-called hero. He’s not a good character.”

“Well, he was played by this guy Jeff Chandler, who was kind of the It Guy in the 1950s. All the leading ladies wanted him in their movies.”

“He actually is kind of a hunk. But he’s such a boor and he has such a stupid costume in this movie, it’s ridiculuous. But anyway. It was kind of a fun movie and Maureen O’Hara was really good, and now I’ve deleted it off my hard drive and next up is Fort Worth.“

Chuck Yeager has reached out and touched the face of God.

He was the first man to break the sound barrier, an ace pilot and a lifelong flier.

After World War II, he became a test pilot beginning at Wright-Patterson Air Force Base in Dayton, Ohio.

Yeager retired from the Air Force in 1975 and moved to a ranch in Cedar Ridge in Northern California where he continued working as a consultant to the Air Force and Northrop Corp. He flew for more than 60 years, including piloting an F-15 to near 1,000 mph at Edwards Air Force Base in October 2002 at the age of 79.

The legendary pilot and retired brigadier general became the first man to fly faster than the speed of sound on Oct. 14, 1947.

The giants are passing on, and the frontiers are growing ever smaller. We are lesser sons of greater sires. 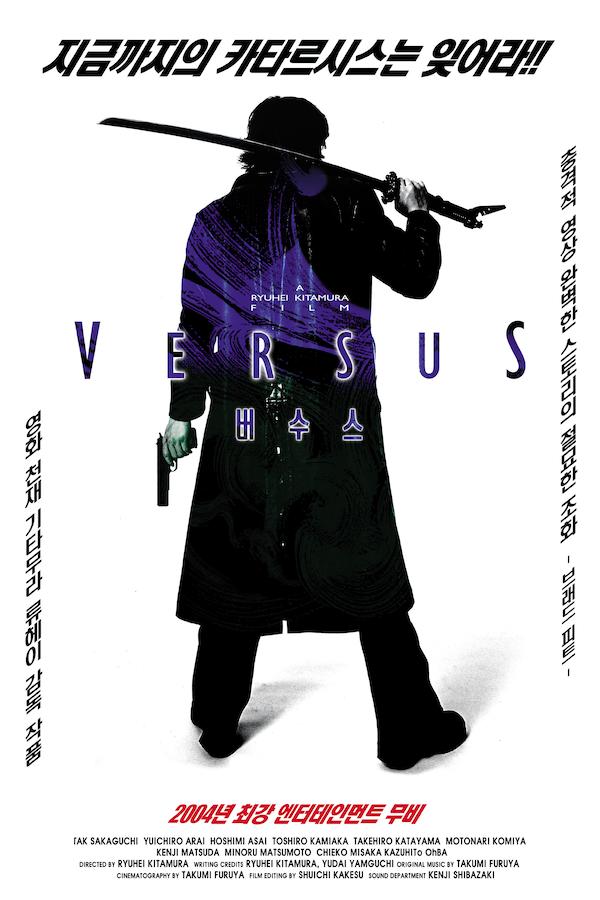 So there is this movie which was made, wow, almost twenty years ago by a guy and his friends out in the woods behind one of their houses. Thing is, although the movie was low-budget, it was not amateur; it had a technically proficient film crew and a director who know what he was doing and how, or had at least graduated from film school and thought he did. It’s been re-released on DVD.

Mexican stand-offs, decapitations and slow-motion fistfights notwithstanding, the most impressive thing about Versus is that it’s actually entertaining for a full two hours.

The film’s greatest achievement, however, is how perfectly it captures the sense of fun that goes into making a movie. Versus is carried by a cast who had to double as on-set chefs, production assistants and stunt co-ordinators in order to finance the film – and they all had so much fun that they did it all again a few years later, shooting a load of extra footage for an expanded release. It’s a B-movie masterpiece, a bargain bin classic, and the stuff of legend. See it now, and don’t ever look back.

It’s a neat little movie which is greater than the sum of its parts and I was kind of chuffed to see an article about it.