So I realize there might be a tinge of hypocrisy in putting an “I could do it better by re-writing it wholesale” post directly after a post on how the BBC’s The Watch adaptation just did exactly that and failed. But I submit in defense that it’s very different for impatience and anger at a franchise to come from a place of love and high expectations, rather from pure malice. (AKA: the BBC’s The Watch adaptation.) I really like Star Wars. I really quite like aspects of the prequels. But: because I like it and want it to be perfect, I have severe problems with the areas that aren’t.

Notice: I don’t have any such issues with things like The Mandalorian, for which I have only a moderate opinion and extremely low expectations. I don’t try to make The Mandalorian better–the mental effort isn’t worth the reward. I don’t have any issues with the Original Trilogy, because there’s no point. I find it perfectly satisfying the way it is.

But I like Star Wars (the real one.) It inspires me, and I want to create something like it: something wholesome, and fun, funny, exciting, romantic, adventurous. I want it to be smart and clever; to avoid the pitfalls that always annoy audiences (me). I want to correct the things it did wrong once and for all, and I want to copy out the things that it did right, except better and bigger and more impressive and with 1,000 elephants.

And anyhow, that’s my defense of fanfic authors re-imagining their favorite worlds and in particular the never-to-be-filmed epic, The Wars Of The Old Republic.

Except for the bit with the severed heads in the mail. I actually don’t know where that came from. 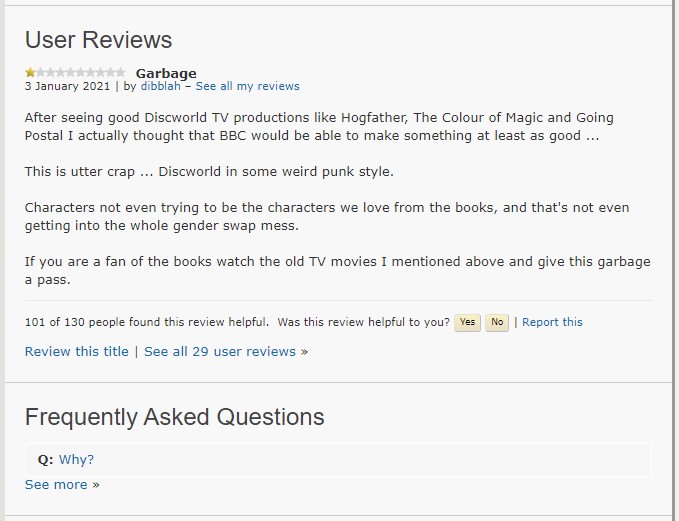 The changes are….puzzling. According to redditors at the link:

Vetinari. Now a Victorian matron who may be a vampire.

Cheery. Now a non binary actor, fully out. No beard or coming out as a female dwarf plot.

Angua. Now shorter than any of the dwarf actors and a monster style Werewolf.

Keel. Man who is definitely not time traveling Vimes.

The mended drum. Now a boring punk theme bar that you might find in Camden.

Ankh Morpork. Not a city, but a collection of warehouses and rejected market scenes from mad max.

I don’t drink but I have a feeling this would be a great place to start.

The old King’s body had been dressed in fine raiment, as though he were prepared for a far, final journey. His purse was at his belt, a hilted sword at his side. Gloves were upon his hands and shoes on his feet. A fur-collared cloak was clasped about his throat, protection against the chill. A diadem circled his brow. His face had been covered with a cloth veil, but this had been laid aside.

After a time, the young King covered him again and went to the woman. He stood by her, looked down at her bowed head and bowed shoulders.

Alberich said, “Your tears do him more honor than any man’s words I have heard yet.”

She spoke without raising her head. “One empty substance is much like another. Men’s words and women’s tears have no meaning. But you are courteous.”