a) Send help, I’m on a Hammer Horror trip. I’ve watched this, The Gorgon, The Curse of Frankenstein, and The Hound of the Baskervilles in the last three days (sick leave time.)

It has just enough enough structure to support its own weight (yes, there are the obvious questions such as, “A Puritan? In Germany? Making the sign of the cross?” and, “Which Emperor is this, exactly?” and, “Why doesn’t burning supposedly kill the vampires?” and, “So where did Mircalla go?”) and it has just enough characterization–and character development–to make it actually interesting, so that you watch to see what happens to these people or what they do next, rather than just marking off time until someone else’s top falls open or another rather suggestive biting session occurs. Or somebody burns a witch. Mind you, a solid 90% of this supposed character development is due purely to the fact that it’s happening to Peter Cushing and he was incapable of acting poorly AFAIK. Nevertheless. Even the Playboy bunny twins do their best. Being able to have actual twins probably helped this movie a lot, not only in the cinematography allowing them both to be on screen at once, but in not taxing the efforts of a single starlet cast for her looks rather than her acting abilities. There’s Good Twin Maria, who is quiet and demure; there is Evil Twin Frieda, who is defiant and reckless; and it’s not actually difficult to tell them apart.

Plot: The fanatical Gustav Weil (Peter Cushing, and it’s pronounced “Vile” because why waste time on these things?) and his sinister group “The Brotherhood” are hunting down and burning witches. Exactly how they determine these witches are in fact witches is unclear, because the opening of the movie shows them ignoring the fact that the victim is wearing a crucifix (but Maria proves her innocence by touching a cross at the end, so….); later, someone accuses them of simply targeting single, young, attractive women. As one would. Meanwhile, a genuine degenerate exists, considers himself immune to The Brotherhood’s rampaging, and regards them with complete contempt: Count Karnstein, who by virtue of his title and the friendship of the Emperor is free to seduce, ravish, and conduct Black Masses and/or orgies as the mood takes him. The mood has become less of late, because Count Karnstein is becoming, frankly, bored with a surfeit of Earthly pleasures. He’s more interested in unearthly pleasures now; and the only side that’s likely to satisfy him is the diabolical one.

Long story short, Karnstein accidentally resurrects Countess Mircalla (AKA: Millarca, AKA Carmilla of Joseph Sheridan LeFanu’s novella of the same title), who turns him into a vampire, gives him a brief crash course in vampiry, and then vanishes from the movie. This is presumably so Karnstein can remain the main villain, and in turn, make Frieda into his sidechick. 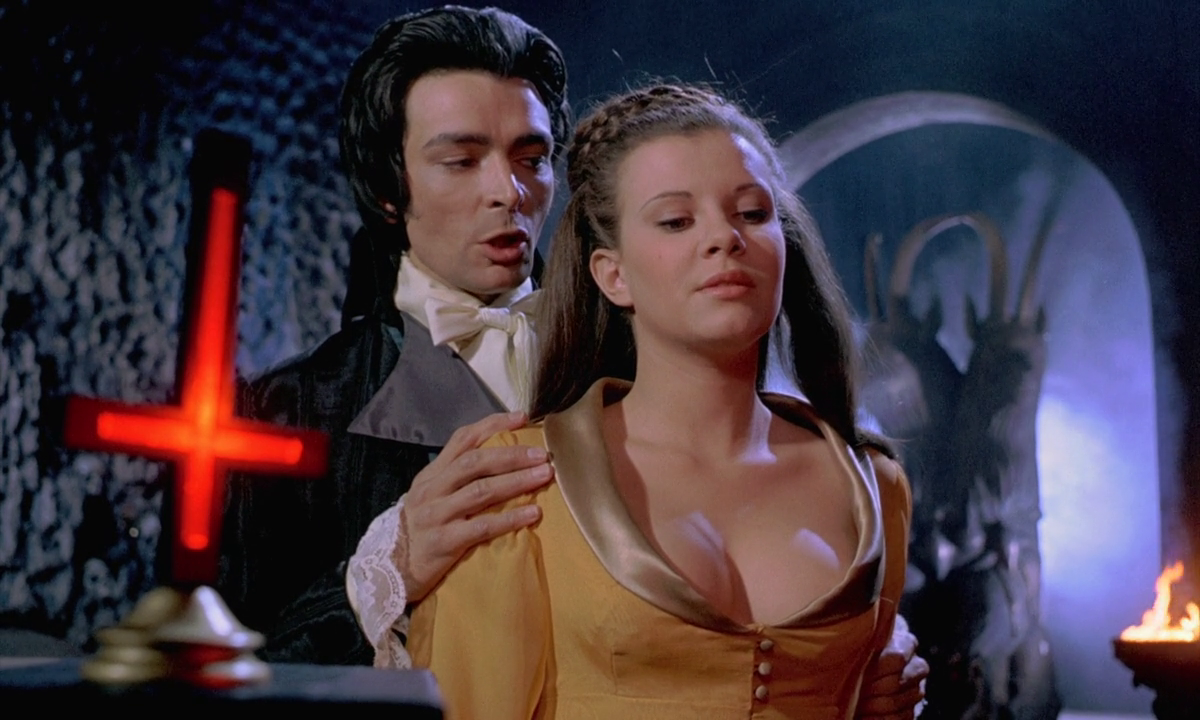 Keeping another sexy vampire around might have been too distracting.

Anyhow, with the mysterious deaths increasing, the witch-burning is intensifying, and, eventually, Frieda gets caught red-handed, red-fanged, and red-faced. Given that she’s Gustav’s niece, she does get the courtesy of a trial, and while she’s languishing in a cell, the Count decides to rescue her by replacing her with Maria.

Maria, possibly because she’s been hypnotized by the Count and possibly because she’s already been mistaken for Frieda before, or possibly because it’s pretty obviously useless to protest given the circumstances, isn’t able to or doesn’t bother to try to inform them of their mistake. However, the local schoolmaster does figure it out, rescues her from the stake in the nick of time, delivers a blistering rebuke to the Brotherhood (and some bonus exposition on what actually kills vampires, i.e., NOT FIRE), and leads them to Storm The Castle.

There, Gustav beheads Frieda, restoring her soul and innocence (and….it’s a moment that’s actually really scary.) Karnstein kills him (stagger, stagger, sign of the cross, collapse), and then, for reasons known only to classical movie vampires, instead of fleeing, stands there on the balcony menacing her, flashing his fangs, and taunting everyone until the schoolmaster manages to throw a spear through him. The end.

I mean, this movie wasn’t ever intended to be anything more than a cheap trashy watch with lesbian vampires. That being said, depending on your point of view, it might be a good or a bad thing to learn that there isn’t all that much lesbian vampire action in this movie, and none of it involves the twins. The closest we come to that is Frieda threatening Maria with unspecified consequences if she snitches to their aunt and uncle.

There is also the fact that after a certain point, everybody in and out of the movie just gives up and goes for it, consistency and intelligence be damned. Yes, this is normally a good thing–but it comes right after the point where, for instance, Gustav has just realized he may be doing the wrong thing, may have been in the service of evil all along. There’s an almost-good scene where his equally-fanatical sidekick offers to be the one to set (unbeknownst to them, Good Twin Maria) on fire; but he refuses and moves forward firmly himself. That’s good. But then we switch over to a moronic (I mean….it just falls so damn flat and that’s not what you want at the climax of the movie, right?) Storming The Castle sequence that, ugh it’s just so cheap! and it’s not even because I kept having Carpe Jugulum flashbacks! Yeah, yeah, yeah, most of the budget must have gone to the twins’ wardrobes, but still. Can’t you even make an axe-, spear-, and torch-wielding mob attacking the castle exciting?

As a stalward vampire hunter just a couple years before.

Peter Cushing, Peter Cushing, and not to mention, Peter Cushing. From his OTT-prayer whilst a fair maiden burns in the background introduction, to his moment of horrified realization that he’s on the wrong side, to his remorseful yet determined acceptance of Frieda’s death, Cushing dominates this movie. Perhaps informing his role (and definitely changing his look, as you can see above): this movie was filmed only months after the death of his wife of 28 years. The man looks gaunt and haggard, as he would for the rest of his career. Also a plus on the casting side is Damien Thomas as Count Karnstein. And, while his is a role that, y’know, does not call for subtlety, development, fine emotional shading, etc….you gotta admit Thomas never looks embarassed by what he’s doing. Silly, sometimes, but never embarassed. He commits to the bit and that’s great.

Again, the Collinson twins do a fine but not particularly taxing job.

And, yeah. This movie isn’t great. It’s titillating trash and doesn’t really aspire to be anything more.

But it also doesn’t try to be less than thoroughly entertaining, and it succeeds.