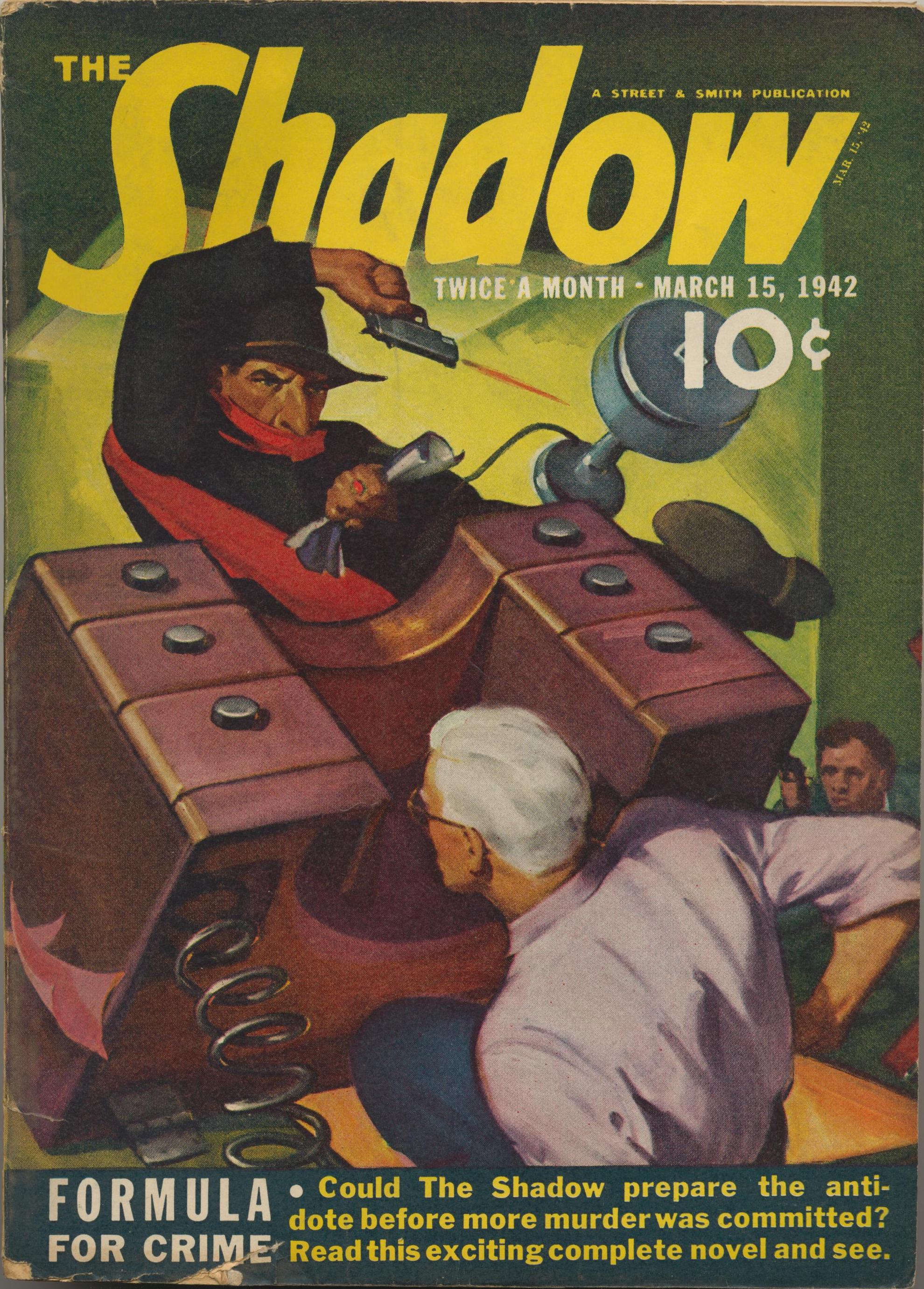 So I’ve been working my way through The Shadow pulp novels (#s16-25 on this batch) all by Maxwell Grant AKA Walter B. Gibson. I’m not 100% sure what triggered this binge, because the last time I tried (back in 2017), I bounced off hard.

As far as each individual story goes, there’s not much to review. Crimes are committed; viewpoint narrator–sometimes one of The Shadow’s agents, such as (sigh) Harry Vincent the eternally distressed dude, sometimes the dogged detective Joe Cardona, sometimes just a random passer-by who gets involved–investigates or gets dragged along in the excitement. There are very few female characters: these are boy books, adventures and gunfights only! Sometimes it’s the criminals who spot a vague shape on the floor that drifts away when they look closer, sometimes it’s the narrator; but there’s always a weird onlooker who is never himself seen, often emitting a weird whispered laugh at moments when laughter is definitely not called for. The Shadow’s agents / POV characters tend to do the legwork of the story, while The Shadow does the heavy detecting, daring rescues, and both guns-blazing attacks in the teeth of gangdom/crime cults/etc. There is often a mastermind or a behind-the-scenes higher level boss to the street-level crimes, but he as well as his minions receive their comeuppance either at the hands of the police, The Shadow, or, in their terror and guilt, themselves.

They’re top-notch pulp fiction: easy come, easy go. I couldn’t really tell you any of the details of any of the past ones.  There was one about, uh, a pseudo-oriental crime cult, and there were a bunch of inheritance murders, and then there was one with this mad inventor (who was being manipulated by his financial backer guys) who had this automatic threatening letter mailing device thingy, and then there was the one last night, which had another oriental crime cult and opium smuggling. The current one is causing me immense amusement inasmuch as it’s about breaking up a ring of extortionist psychic mediums…and The Shadow keeps breaking up seances by showing up and cackling, which scares everyone including the phony psychics.

Needless to say, The Shadow is handled in a way that preserves the mystique of the character, shows how powerful and dangerous he is, and maintains his cool bravura. There is never more than a glimpse of The Shadow: usually, all that the “narrator” sees of him is his outline–tall, thin, in a black cloak and slouch hat–or his hands and girasol ring when he’s working at his desk. Even when he is injured, tired, or wounded–which is rare, since his usual role is to swoop in when his agents are in danger–there is never a sense of vulnerability to this guy. In fact, on the rare occasions when we do get close in to The Shadow, he just gets creepier. So far, too, it doesn’t even seem like the author is cheating to make him enter and escape the situations he does, either. It makes perfect sense that The Shadow can slip in and out of an ambush by every gat wielder in town when he’s just barely been forewarned of their presence by his own habit of being stealthy, and cautious. Or that he’s got his own man in place ahead of time to cover his escape. Or that he’s able to take advantage of confusion and panic and plunge through the midst of the gangsters, dual automatics blazing.

One of my problems back in the day was that the action was terribly, terribly written. A dozen-plus books in, it’s definitely better, which is to say, there’s comparatively more of it and it’s less clunky. This is not to say that it’s great. But it’s at this point readable.

Some of the descriptions are bang-on bone chilling. And there are of course some standout scenes–the wicked creepy part in an early book where Lamont Cranston, playboy millionaire, returns home unexpectedly, wakes to find a man with his own face in his own room, and is in no uncertain terms told that he can leave town again or be denounced as an imposter by the real Lamont Cranston.

And then there’s the part where the Burmese crime cult is going to imprison the drugged damsel of the novel in the sacred silver casket, for ever hail Kali amen!….only to find that The Shadow has snuck in and is waiting inside it instead, presumably solely for the sake of scaring the hell out of everybody with the dramatic reveal. (To make things even better, once that reveal is over, he takes a seat on the high priest’s ornate throne while menacing everybody with his dual automatics and, of course, laughs.)

But….well…whenever The Shadow is “gliding soundlessly” or “flitting eerily” down a hallway or across a room I keep imagining him walking on tip-toes and that just kind of ruins it all.

9 thoughts on “The Shadow Knows Readlist”