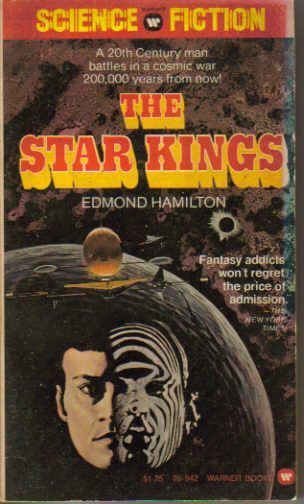 This book is Space Opera–as written by one of the Old Masters, first of the breed, foremost among those that led the way and titan to those that followed–at its finest. I mean, his nickname was “World Wrecker,” you can’t get better than that. There’s a different adventure every 1.5 chapters, a space princess, a scantily-clad space-concubine, grizzled space-captains, battleships, cruisers, phantoms, cunning or treacherous advisors, quarrelsome barons, and grim and gallant fighting men. There’s the lurking menace of the Clouded Worlds’ rebel fanatics and the legendary, unknowable, unutterably fearsome threat of The Disruptor that keeps even their cynical leader in line. There’s also, to make sense of it all, a present-day (1949) protagonist who has had his consciousness transferred into the body of a star-Prince–and thence suddenly into the teeth of the action itself. But what can a man of Earth–our Earth–do when the stars themselves are at stake?

Aaaaand that’s basically it. If you feel you need to somehow know more about this book, then you ought to read it.

It’s a book that reads incredibly quickly and hits every single pulp fiction trope that it possibly can without changing genres (and that even includes the crashed ship being attacked by hostile natives….if there had been space for even a single chapter more there would have been some sort of sword-against-sword action going on.) –but yet there’s a consummate level of skill involved that carries it all off.

Partly, it’s the prose, which sells the sensawunda that can only be achieved by an active imagination, a yearning for stars yet-unreached, deep knowledge of the past that informs the actual doings and behaviors of mankind; and a nimble pen that doesn’t flinch from a little bit of mauve from time to time (see: scantily-clad space concubine.) The other part is that Hamilton actually did know his business, and, preposterous though the plot is, makes it proceed logically from the actions of intelligent and motivated actors, one of which is often–but not always–our hero.

A third and crucial part is that our hero is a hero. Starting out from an ex-soldier with a yearning for more than his old accounting job will offer him, and thrust abruptly into the whirl of galactic politics and treachery, he accounts himself well, never forgetting that he owes a debt to the true Zarth Arn, whose face he wears and whose place he has taken. Also, another tribute to Hamilton’s prowess, although John Gordon is an outsider with only a cursory knowledge of the situation, never once does anyone to sit down and explain things to him (us) in simple language. While he’s no moron, he’s always scrambling to achieve an in-scene, in-person goal–to keep his cover, to bluff the enemy, to not break his morganatic wife’s heart–and he’s doing it with limited resources and high stakes.

The other characters suffer from the fact that this is a pulp novel at heart. They’re colorful, they’re placed to provide maximum interest, and they all give the impression that, given more time to navel-gaze, they could be turned into interesting persons indeed, rather than what is simply given them by their descriptors–space-princess, stalwart captain, sneaky advisor, cynical tyrant.

The one character who does do particularly well in this is, oddly enough, the cynical space-tyrant who leads the fanatics of the (?) Clouded Worlds. Shorr Kan is an odd duck of an antagonist, professing a fanatical hatred against the Empire that he in no ways feels; his own desire is for naked power alone. He’s cunning enough to seed the elitest ranks of the Empire with his own men, assassinate the Emperor and frame his own son for it, cold-blooded enough to use a brain scan device that, on uncovering neural connections, breaks them irreparably….and yet human enough to immediately switch the device off when it reveals that he’s got the wrong man. Mind you, he’s also dumb enough to let his suddenly-ultracooperative prisoner take his girlfriend along on a harebrained scheme that couldn’t possibly go wrong, so…perhaps his defeat was more inevitable than it seemed. Apparently he gets brought back for the sequel, so.

Rated: man once dreamed of the stars!