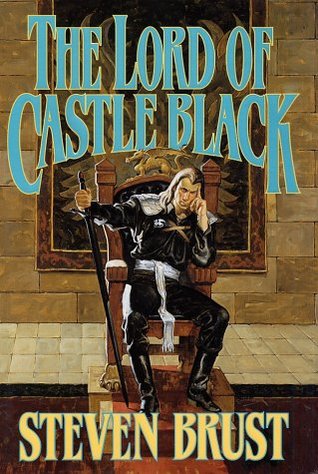 TLDR: Even if this one is pretty good, I have lost all patience with the Dragaera Cycle.

It’s difficult to read Steven Brust’s books at all now–even ones I previously found okay, like Issola and the very first Jhereg–because now I know the dirty secret. He’s not interested in his own story, his own universe, or making it all fit together. Dragaera isn’t a tightly-woven narrative tapestry, it’s a collection of very bright and colorful threads in a loose knot. Now and then Brust may tug a couple of threads taut, just to show off how shiny and pretty those strands are. But there’s no overall, well-thought out picture that can be salvaged from the tangle at this point (well, not without extreme and conscientious effort which I highly doubt will be made).

Brust’s interest in Dragaera lies in…I can’t say the characters, because he seems painfully uninterested in them, but he does like gourmet food, philosophical digressions (AKA, why socialism is good and mafia aren’t), and….I guess, Devera. And this is a problem, because klava and gourmand fried chocolate-dipped garlic and roast asafoedita-stuffed dormouse have left enough of a bad taste in my mouth that even after reading half of this book and enjoying it, I was extremely reluctant to pick it up again–and I still can’t bring myself to actually read The Baron of Magister Valley (AKA, The Count of Monte Cristo IN DRAGAERA.) Why should I read a book in a series that the author doesn’t even want to finish and doesn’t like any more? Why should I expect to be pleasantly entertained when that’s not the purpose of the story, anymore? Why read a well-written and enjoyable prequel to a series that the author doesn’t want to finish?

Brust does not want to tell stories about swashbuckling but hard-edged heroes, noble but ruthless warriors, sorcerers who are as powerful as gods, and gods who are as petty as men. He doesn’t want to tell a story of criminals or of empires, rebels or righteous war. He doesn’t really care about excitement any more, and adventures are downright distasteful. Much better to drink egg coffee in a corner cafe. His stories are the stories of an old man who shares little in common with his younger self (who at least tried), or with younger audiences (who came on board for the swashbuckling, capeswishing, rapier-flashing, epic fantasy stories written on a narrative backdrop that is a richly-woven tapestry, etc…AKA, people like me who stuck it out for fifteen books but have at this point noticed which way the wind blows.)

That said, and with it in mind, Brust is at his best when he’s riffing off a better author and doesn’t have to come up with those tedious narrative beats himself. As in Paths of the Dead, which I own but haven’t read in several years, this is one of those instances.

This subseries is a prequel to the main Vlad Taltos books, covering the fall and rise again of the Dragaeran Empire. It’s also a riff off of Dumas’ The Three Musketeers–D’Artagnan, Portos, Aramis, and, uh, whats-his-face, Oliver Reed played him in the movie…whatever–becoming Khaavren (the main hero), Tazendra (the dumb but loveable ruffian), Aramis (the sneaky Yendi), and…I dunno, the other guy. (WHAT IS HIS NAAAAME?!) So, I had it wrong, this is actually book 2 of a sub-trilogy within the Khaavren Romances subseries of the Dragaera Cycle. Eh, whatever.

The plot is: Khaavren, formerly the swashbuckling hero of a previous generation, has decided that he needs to get back in shape and take to the road again. His timing is good, because meanwhile, Zerika has re-emerged with the Orb from the Paths of the Dead–making her indisputably the new Empress. Problem is, there really is a dispute going on, because there are at least two pretenders to the throne, and they have quite a few more men than she does. (She’s got about twenty-five, including Khaavren’s son Piro). Meanwhile, young Dragonlord Morrolan has set up shop in a ruined castle and begun doing what he is assured Dragonlords do, which tax the local civilians and use the money to assemble an army. He’s got about three thousand soldiers. Meanwhile, immortal sorceress Sethra Lavode is…well, she’s in her mountain doing whatever she does that is of deep mystic import and is never actually explained to the audience. And, since this is book 2 of 3-ish, that’s about it. There’s a couple of battles but they don’t resolve the Pretendership conflict, and on the personal level, the book ends with a near-tragedy as Khaavren’s old-school values and personal prejudices end up pushing his son away into a life of banditry (whee!)

So the main attraction the Khaavren Romances have is that the writing style, as well as the plot, homages Dumas–that is, it’s wordy, literate, and full of narrative filligree and little stylistic flourishes which ironically help flesh out the world and the characters far, far better than plainer prose. It’s a bit stilted, but it’s charming, often amusing, (“Oh bother,” said Tazendra, “I’ve lost the reins.”) and sometimes actually quite witty. Actual action is treated in classic style: with many flourishes and little detail and as much posturing as is necessary to show our heroes in a heroic light.

The characters are less of an attraction, mostly because they’ve already been established and the narrative convention is to keep them on a bit flatter of an arc than we’d normally see. Mostly the only development is between Piro and his love interest Ibronka, culminating in a highly amusing scene wherein their friends basically lock them in a closet to resolve the UST. Morrolan, the second lead, amusingly gets slighted by the biased narrator, who regards him as an unsophisticated country (human-raised) bumpkin who wavers between dangerously airheaded and just plain dangerous. Needless to say, Morrolan’s actual actions put a lie to everything but the dangerous bit.

So, overall: this is a good book, and it’s part of a series that once showed great promise. Unfortunately, given that the rest of the series fails signally to live up to that….I honestly can’t enjoy it anymore.